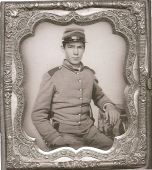 Shortly after returning home to Richmond following the end of the Civil War, William H. Cowardin opened a watch and jewelry shop at 1804 East Main Street. He based his business on honesty, hard work, dependability and service – virtues that would be passed on among future generations of the Cowardin family.

A talented craftsman, William made watches, clocks and spectacles by hand at his shop on Main Street. One of his many creations included an ivory magnifier hand-carved with a picture of himself, which he gave to his wife for an anniversary present.

“[William H. Cowardin] was… the best kind of citizen…quiet, unostentatious, a merchant and mechanic, loving his business, delighting in his own ingenuity and skill but never boasting of them, and he brought up a large family of good citizens.”

In 1900, William retired and the second generation of Cowardins would run the business well into the 20th century. His sons were raised in the business and were trained in the art of making watches and jewelry and hand engraving. One of his sons, George, a talented hand engraver, engraved the Lord’s Prayer on a dime and sent it to his soon to be wife. The next day he mailed her a magnifier to read it. In 1935 Cowardin’s moved to 1707 East Main Street. It remained at that location until the early 1970s when the floods of hurricanes Agnes and Camille forced the company to move. 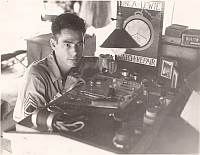 Just as William returned home from the battlefields to start the business, Lewis T. Cowardin, the third generation of Cowardins returned home from war in 1945 to take the helm of the family business. In 1959, the first expansion came as a new store was opened in Richmond’s first shopping center, Willow Lawn. In 1975, Cowardin’s opened another store on the South side of Richmond in Chesterfield Town Center.

In 1986, Lewis with his three sons, Brian, Ron and Clint, moved their Willow Lawn location from the mall to a new location just beside the shopping center in their own building. This is Cowardin’s current location at 4909 West Broad Street. The Chesterfield  location was closed in 1995 leaving the West Broad Street store as the company’s sole location.

L. Taylor Cowardin, great–great grandson of William, and the 5th generation of Cowardin’s Jewelers, joined the company in 2003. He, along with Brian and Clint continue the time honored tradition started over 150 years ago and are dedicated to the same core principles of honesty, hard work, dependability and service.